Having grown up in the Chicago suburbs, as a child I was not familiar with the landscape where I have made my home over the past 30 years. Moving with my family to Galena, IL in 1991 was a big change and one I’ve never regretted. As we drove northwestward with a truck loaded down with our worldly possessions, we left the city in the rearview mirror.

My mother’s family removed from England in the 1820s to permanently settle in the United States. They arrived at Galena soon after the Black Hawk War- a struggle which drove the Sauk and Mesquakie nations from the booming lead mine camps in Jo Daviess County, IL. A large part of my interest in moving to Galena was that I wanted to continue my research and writing on the lead mine district in the upper Mississippi River valley, a study I began as an undergraduate. I also wanted to continue my family history research. Once in Galena, I became the curator of the Galena History Museum, conducted research, and wrote many lectures on regional history topics.

I was not then familiar with the concept of “Driftless”. Over time, I came to understand that a relatively small region, which includes parts of Jo Daviess Co, IL, parts of Dubuque Co, IA, and along the Mississippi Valley to a northern point at about Menomonie, WI, was spared from the last ice age, thus we find ourselves in an unglaciated region where the immense packs of ice and “glacial drift” did not flatten the topography.

When I moved to Platteville in 2011 to accept a position in the History department at UW-Platteville, I began to explore Grant County. I have come to admire its beauty and the many opportunities to get up close and personal with the land. I have kayaked the lower Platte, hiked up the M, and discovered remnants of the 19th century lead mining boom. I recognize that I am walking on land traditionally occupied by the Ho-Chungra, or Ho-Chunk, and other nations prior to their forced removal from lands south of the Wisconsin River in the 1830s. I think about the generations of families who lived, raised their families, worked, and passed away among these beautiful hills and valleys.

One of the natural phenomena that delights me most is that our region is filled with springs. The water seeps from cracks and crevices. Rivulets of fresh spring water course though pastureland and in quiet hollows, and then tumble down to create wild rivers that flow to the mighty Mississippi River or to the Wisconsin. These two great rivers- The Mississippi and the Wisconsin River- form Grant County’s western and northern borders. Both rivers served as early highways to move people and goods from the Great Lakes to the Mississippi River. Native Americans and early European explorers and traders used these rivers to travel from Quebec in Canada all the way to the Gulf Coast.

Grant County’s beauty is seen in its ancient oak groves, its mounds, its creeks, and rivers. It is seen in the shy mink who dances about the rocks along the Rountree Branch, in the turkeys who awkwardly cross the country road, looking back to beckon the rest to the flock. The impossibly large eagle’s nest, protected by wary parents and the meadowlark flitting in the field are sources of great joy to me.

In this season of Covid-19 with its multiple disruptions, I find great solace in the beauty and majesty of Grant County’s landscape. Being outside in our parks and reserves throughout the county fills me with hope and joy. I drink in the quiet and the let my mind wander. I let my attention be drawn to the birdsong and scuffling of small critters. I put my phone on silence. I hope you get outside soon to take in the fresh air, beauty, and peace awaiting you in Grant County. 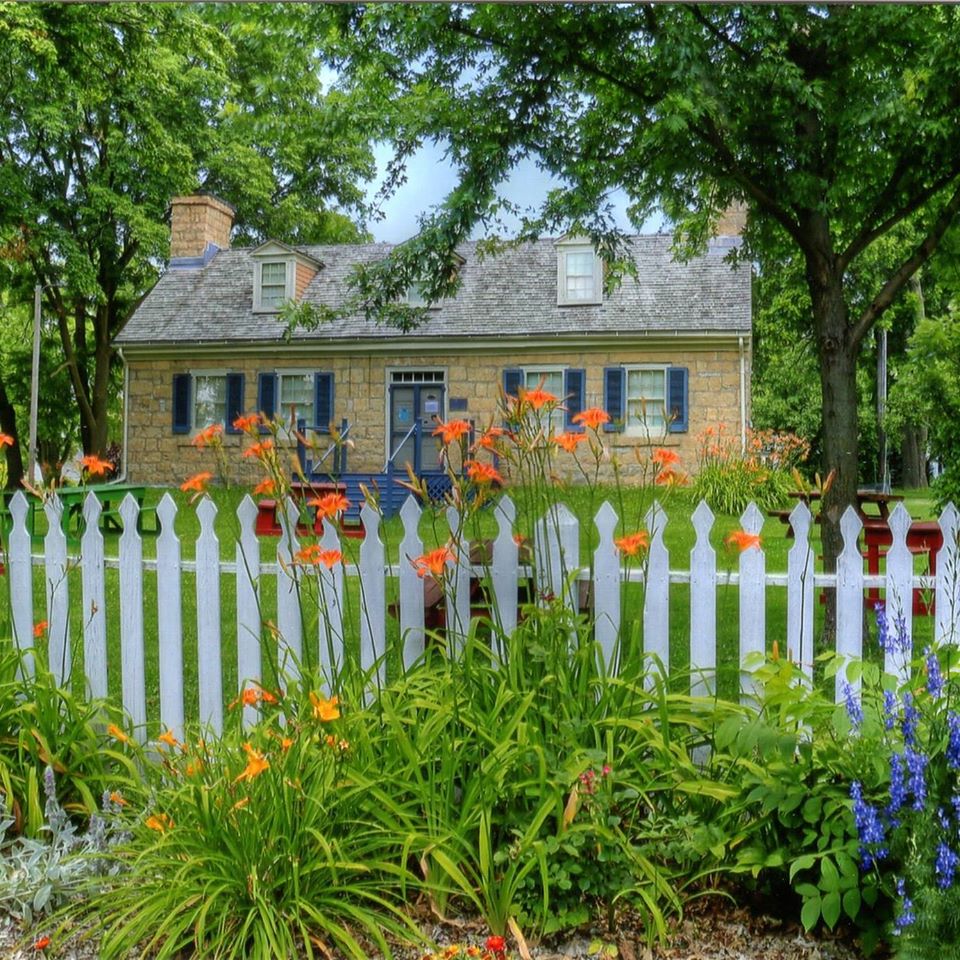 Come celebrate Laura Rountree’s birthday with Grant County Historical Society. Laura (1870-1966) was the grand-daughter of Reverend Samuel Mitchell who commissioned the building of the Mitchell-Rountree Stone Cottage in 1837. Laura, artist and musician, lived with her parents and then alone in the Cottage all of her 95+ years. She bequeathed the Cottage, the 2.5 acres on which it sits, and all the articles in the house to the Society upon her passing.

The celebration will include birthday cake, beverages, and tours of the Cottage. There will be a special exhibit of Laura’s small artworks. Tours are $5.00 for adults and $3.00 for children. This is the last time this season the home will be open to the public. Groups may make a reservation for special tour dates throughout the year by calling the Society at 608 723-4925.

Please help us to preserve the cottage building and grounds and catalog and preserve the items within by generously making a donation to the Cottage fund. Donations can be made in cash, by check or on-line at https://grantcountyhistory.org/support/donate/